Hakeem Mohammed Nabi Khan, the grandson of Maseeh-ul-Mulk Hakeem Ajmal Khan, was born in Delhi on 5th of November 1920. He had his basic education in Urdu, Arabic, and Persian from his elders and later qualified as a Doctor of Graeco-Arabic (Unani) system of medicine from Tibbia College, Delhi.

His acumen in his profession was recognized by his peers and, at the tender age of 23 years, he was appointed as a member or the Unani Research Committee of India where he worked under the supervision of the renowned scientist Dr. Saleemuzzaman Siddiqui who later founded the H.E.J. Research Institute of Chemistry at the University of Karachi. The ground-breaking achievement of Hakeem Mohammed Nabi Khan was the formulation of “JOSHANDI”, an efficient remedy – in the form of tablets – for cough, cold, catarrh, and allied problems.

In the year 1948, he migrated from India to Pakistan and settled in Lahore where a year later he established “AJMAL DAWAKHANA” (Herbal Drug Industry), and opened clinics of this system of medicine in different cities of Pakistan.

He was elected as the President of All-Pakistan Tibbi Conference (Organization of Tibbi Doctors) and was the Pioneer President of Unani Drug Manufacturers Association (PUDMA) – positions that he held till the time of his demise. Hakeem Mohammed Nabi Khan, along with his friends, chiefly: Hakeem Hafiz Muhammad Saeed of Hamdard Dawakhana, Karachi; Hakeem Tayyab Ali Tayyabi of Tayyebi Dawakhana, Karachi; and Hakeem Aftab Ahmad Qarshe of Aftab Qarshe Herbal Industries, Lahore; made untiring efforts for the promotion of Tibb Unani, the Oriental System of Medicine.

In 1988, BBC London selected him as a key figure in the traditional system of medicine and made a documentary on his life, profession, and achievements.

Hakeem Mohammed Nabi Khan wrote many articles of public interest on herbs and herbal system of medicines which were published in newspapers and scientific magazines. He was also a well-known poet – the author of two “Diwan” (Collection of Verses).

He left this world on July 2, 1990, and his mortal remains are interred in Lahore. 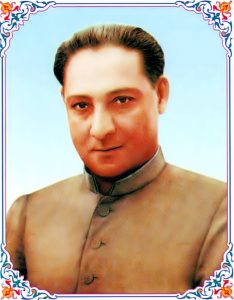